Bitcoins, the cryptographic peer-to-peer currency. That might sound like you need to study computer science first, but don’t worry! It’s actually very easy and you can get started in a few minutes without spending a dime. We’ll show you how to join the bitcoin economy quickly and safely.

First: Get a Wallet

In order to own, receive or send bitcoins, you will need a “wallet”. A wallet is basically just an address under your control where your bitcoins will reside. This address is totally anonymous and you can happily give it to anyone who wants to send you some money. Additionally, as a wallet owner, you have a secret code, a so called “private key” with which you can authorize any payment made from this wallet.

The fastest and easiest way to get a wallet is using one of the online services like Coinbase or MyWallet. If you want to just try bitcoins as quickly as possible, go ahead. But keep in mind, that you are now putting your money on some server, controlled by some other individual. The recent hack of the popular site instawallet.org shows that you should really take a few extra minutes to create a wallet locally on your own computer. We do not recommend keeping any money in an online-wallet for a longer time.

To create and use a wallet on your own computer you will need a small piece of software. There are several good ones out there, but we recommend Multibit. It is available for Linux, WIndows, Macs and absolutely free as in speech: 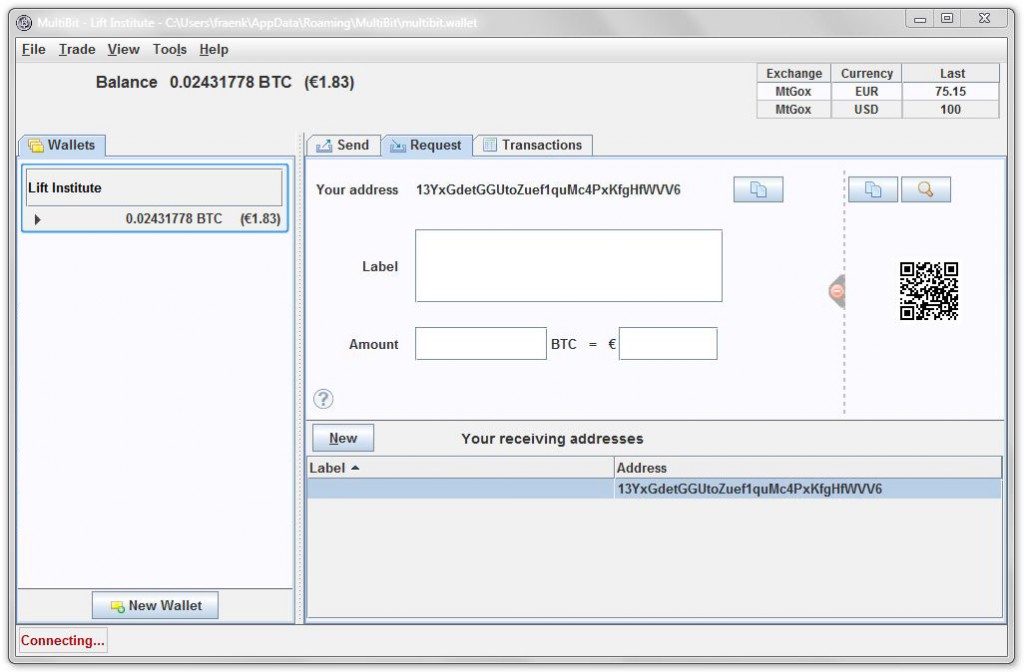 Screenshot of the multibit client under windows

It’s as easy as that and now you are ready for your first bitcoins.

Next: Go get your first Bitcoins

For the start, and to familiarize yourself with the use of bitcoins, you don’t need even need to spend anything either. Here’s a good way to get a fraction of a bitcoin showing up in your wallet quickly and for free, just for visiting some other websites:

NOTE [18.6.13] BAD NEWS: CoinVisitor has vanished off the face of the internet AGAIN! The site is currently unreachable on any known domains, even the chat has gone offline. After the past few weeks of issues at CV, we must guess that CV will be gone for good. BUT, we are not giving up hope so easily, lets for the moment believe they will reappear all fixed up and functional in a few days. We are keeping it under our radar!
NOTE [20.6.13] P.S.: An official statement has been issued HERE.
NOTE [25.6.13]: We have been able to talk to the CoinVisitor staff and can confirm they are working on a complete overhaul of the site. To show some community love they have offered to sponsor the LIFT Lottery in part. READ MORE

The transactions will take  another short while before being processed and transferred to your wallet. Sometimes it takes up to a few hours before you can actually see the balance showing up in Multibit.

While you are waiting, there are plenty of other sites where you can get small payouts similar to CoinVisitor and we have prepared a list of more free bitcoin sites here.

You can also trade bitcoins for Dollars, Euros and other regular currencies on several sites. The best known bitcoin exchange with the highest market volume is mtgox.com, operated by a Japanese company. If you live in Europe, bitcoin.de is a good option, too. But keep in mind, trading bitcoins is a very speculative business at the moment, and while you may make a good gain, you may as well lose big bucks!

We hope you enjoyed your first steps in the world of bitcoins. If you have any questions or thoughts, leave us a comment below.

We’ll be back soon with part II of this tutorial where we’ll show you more ways to get bitcoins, how to make a backup of your wallet, and last but not least, how to actually spend bitcoins.