Everyone, maybe even including You, who is just learning about bitcoins, is wondering how to perform the alchemy of creating digital gold out of nothing but calculations. And there’s those pretty black boxes promising to do the work for you.

Bitcoin mining is a geeky hobby, and taken serious, it becomes a very technical business. But as bitcoin slowly captures a more mainstream audience, the demand for a consumer-ready money-printing-machine comes inevitably.

One company promises to make everyone a happy miner: Butterfly Labs! Shiny, nice looking black brushed aluminum boxes that sit neatly next to your laptop, hashing on the blockchain.

The few ASIC manufactures who are already delivering sell their products in very limited quantities over auctions, on forums and for BTC only. It’s almost impossible to get your hands on any of these. Meanwhile, ever since June 2012, Butterfly Labs (BFL) has been offering their black-boxes for preorder on a nice looking website. They even accept payment in Dollars through PayPal.

BFL also runs a lot of ads on bitcoin related sites and they are always constantly giving very optimistic statements about their research and development progress. In reality, though, shipping dates have been pushed back several times and almost a year had passed before some very few devices finally got delivered.

We do not want to join the speculation about whether BFL may be a huge scam, or in fact just a victim of unfortunate delay due to bad circumstances, as BFL would argue themselves. Let us just assume they will eventually deliver all orders.

BFL is not disclosing how long their order backlog is, but a delivery “2 months or more after order”, as stated on the website today, is certainly a false promise, if not a plain lie! While BFL tries to keep their secrets and continues to accept preorders, a community created list of open orders appeared on the net:

We guess the list’s 3000 entries only represent a fraction of the orders actually placed. The order numbers alone count up to above 60.000. Only 2 orders on there are marked as shipped and from the chatter on the net we would estimate less than 30 devices have been shipped in total so far, and those went mostly to the press and reknown bloggers.

BFL is not a big company with huge manufacturing capacities and additionally they still seem to have trouble with the configuration of their mass-production devices. What has been shipped so far were probably just early test-assembly devices, delivered to gain some positive PR, and ever more preorders.

Even when trying to be optimistic, it’s pretty clear that a new order will easily take more than half a year before getting delivered, if delivered at all!

Ok, so you’ll have to wait a while. That sucks! But 5 GH/s for less than 300$ still sounds good! Nope, sorry, it doesnt! Take into account how the hashrate on the network will increasing during your waiting time. The day you might finally get your long awaited parcel, the 5 GH/s inside might be less efficient than a 300$ GPU today. 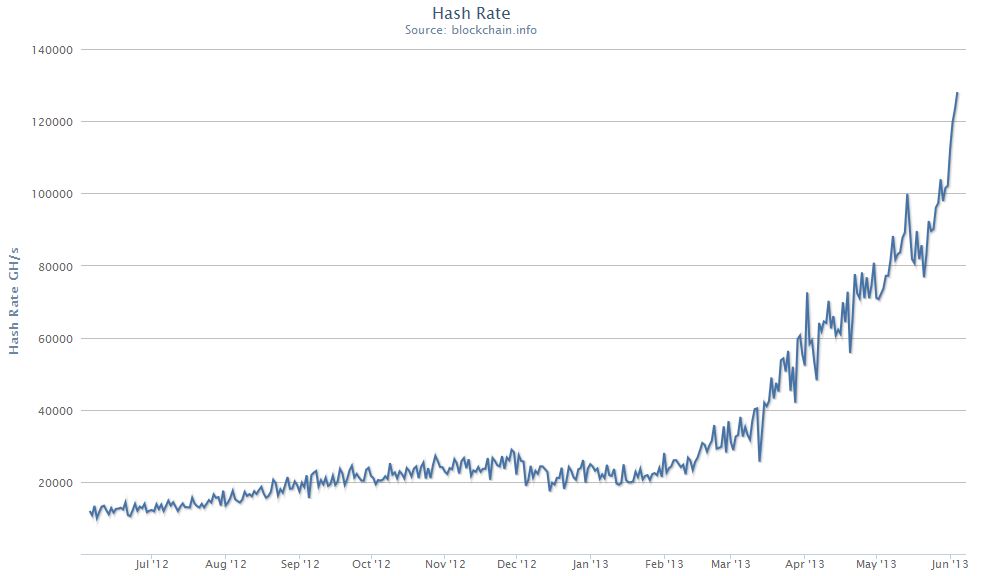 Hashrate Graph over the past year provided by blockchain.info. CLick to visit LIVE version.

A few who have placed their orders as far back as last year might still be able to get a good return on their mining. But if you think about placing an order today, you should not expect to have a great monetary return!

One thought on “The Butterfly Promise – ASIC’s for Everyone”